just a quick thought and revelation, tying in all of these misinterpreted deities and ancient philosophies.

“Created in the image of god”

– In Daoism the human body is viewed as a small universe, an organic replica. As anyone who has studied quantum physics knows, everything is made of energy.  Every atom is energy at iits very source, drop from atoms, to electrons, protons, neurons, to the quark level, to the string/plank level which is energy.

When looking in the human body or out, as an observer and  sans the emotional connection to ideals it is easy to recognize similar patterns: 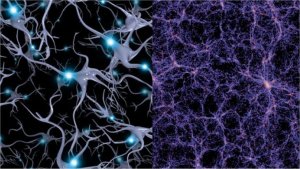 on the left is a repeatable neural pattern of brain cells and on the right a large scale distribution of the galaxy.